The Garden Wall of the Whittlesey House 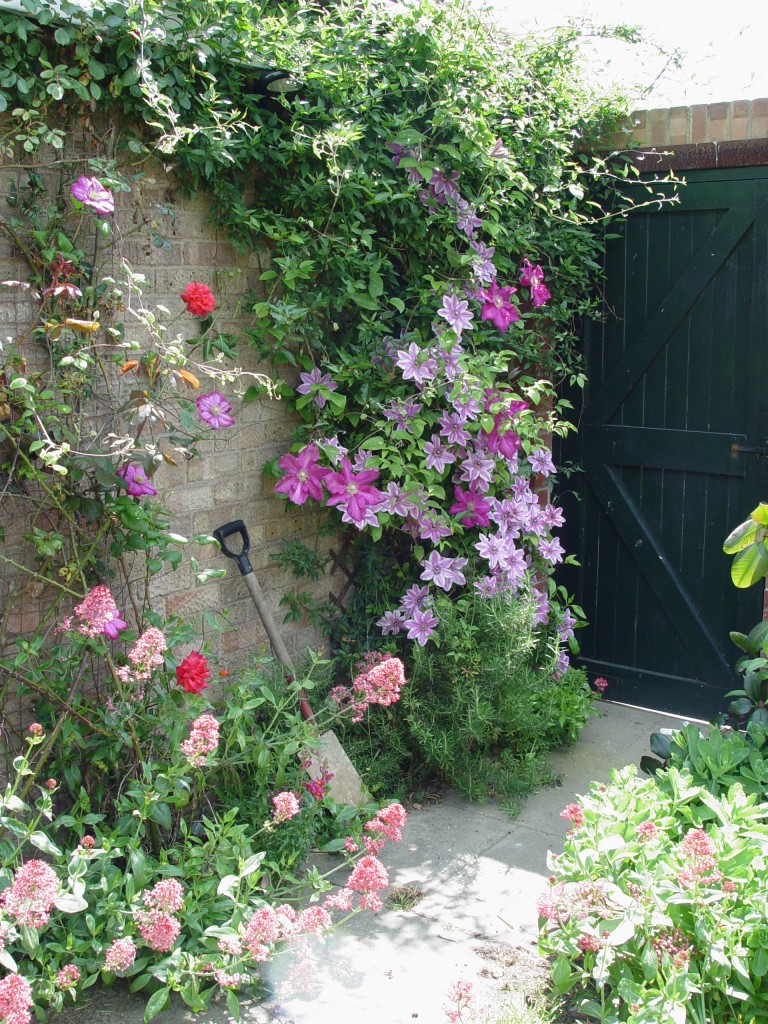 I was going through photos of our garden, after my last post, and found one of a spade leaning against a wall near our garden gate. I took the photo because I wanted to paint it, our garden looked beautiful and that Summer was probably its peak. There were four or five different varieties of clematis growing along the house and garden walls, all flowering at different times of the year. Because clematis and roses are favourite flowers of mine, ex had sprinkled the garden with them and, apart from the spring daffodils and an errant yellow Waterlily, the plants were all themed to blue and red hues – it was a feast of lilacs, purples and most of these glorious flowers had heavy scents that flavoured the summer breeze and lifted winter blues. There were a few white flowers like the jasminium that clambered up the wall to my study window to add a subtle scent to my daily grind …but by luck, or considerable planning by Ex, the garden never looked “patriotic” and I cannot remember seeing red white and blue all flowering at the same time, it was more like an ever changing colour chart of soft hues that blended into a very English country garden …and it is something that, though I miss it, I will never try to duplicate in Spain… It was of its moment, it was part of an era when the children were young and I think my ex and I were still in love. 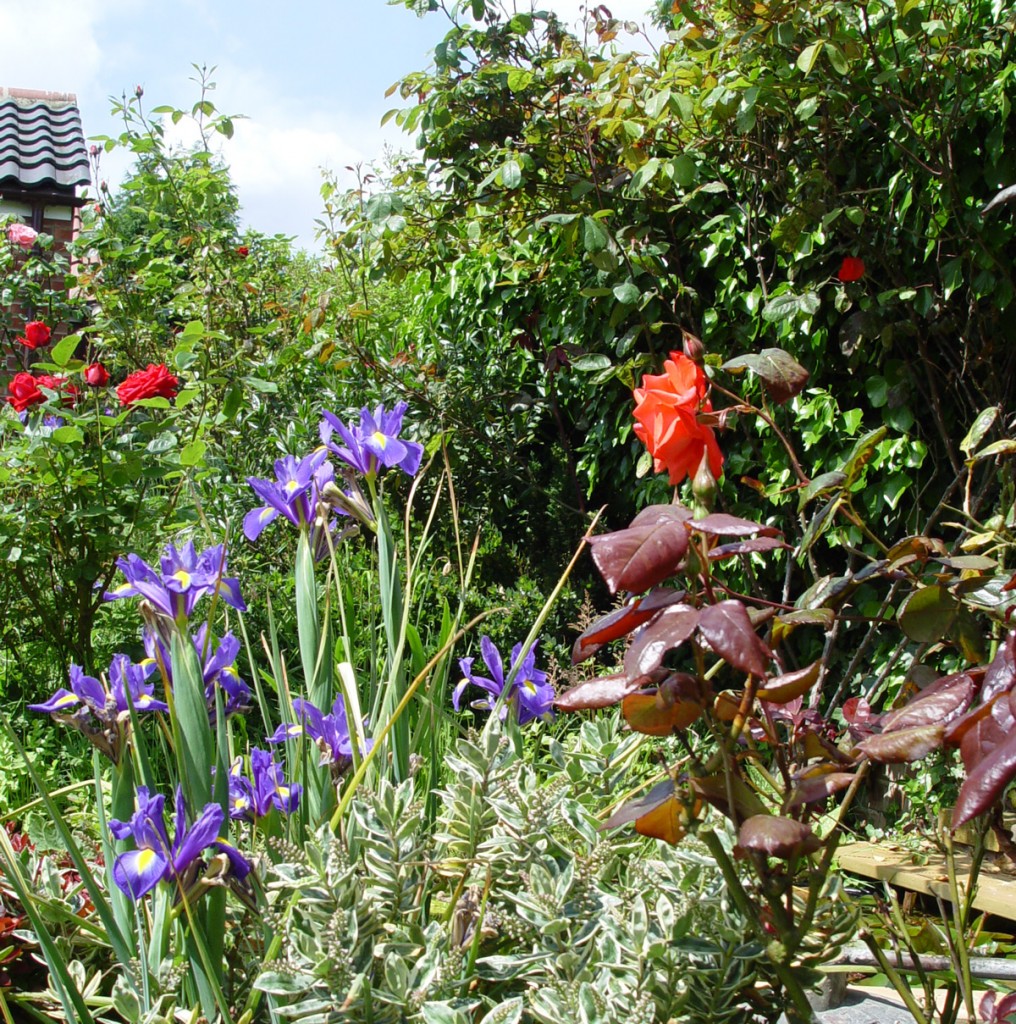 There was a small artificial stream that seemed to come from under the garden wall and appeared to empty itself into a  natural looking pond. There was an old low-walled bridge, between the two, that was just wide enough for the children to march across it single file. The pond and Stream were both stocked with goldfish and, as the pond was four feet deep with a small cave at the bottom, at its narrowest point, we had some startlingly white ghost koi who would – against all the book information – come up to the surface and allow the children, Ex and me to feed them by hand when any us of sat on the bridge to while away a few moments. 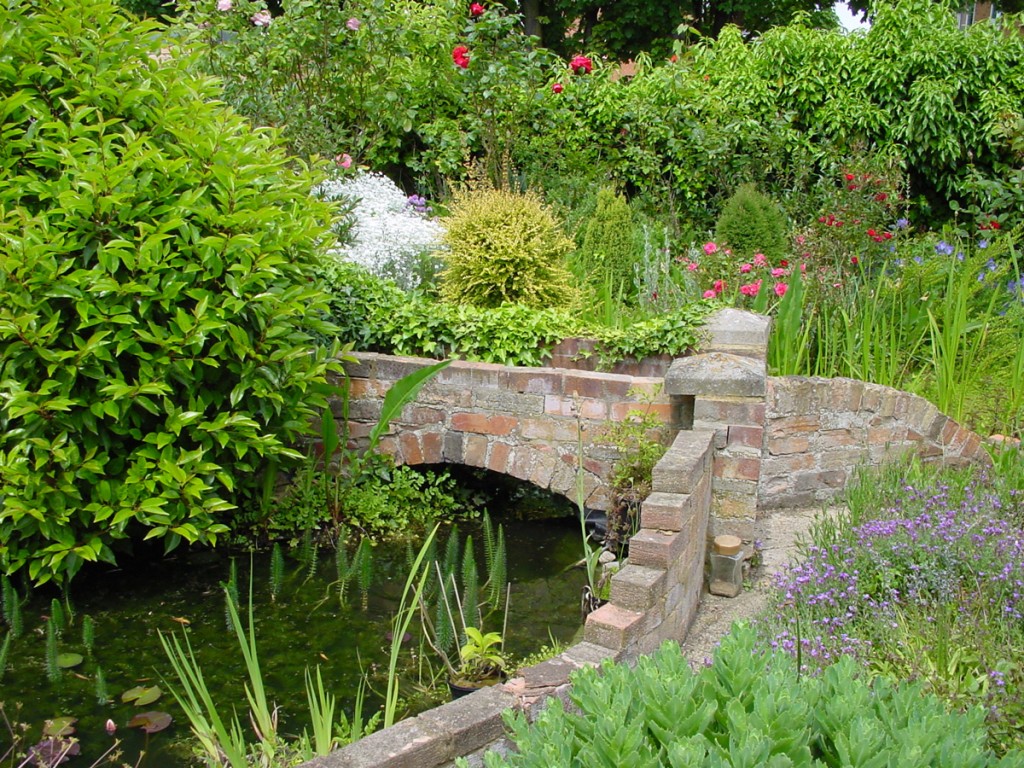 It was pretty idyllic for a while… but, rose-tinted spectacles or not, nothing in a garden stands the test of time when pitted against a teenager… As the children grew so their playing got more adventurous. OS was no worry round the pond, nor was YS, they had lived in and round water, ponds and pools since they were tiny, but nieces and nephews, friends, cousins and children in general meant our garden wasn’t child-safe… The final straw was OS deciding, with no match or lighter to hand, that he needed a small flame to light a cigarette whilst in the garden (when he and his teenage friend were babysitting YS before I got home from work). They noticed a few dry leaves on the ground near the clematis next to the house and happened to have a magnifying glass …what was left of the clematis was doused from the pond and I had an interesting telephone call from OS. The upshot was that the clematis wasn’t replanted, the plus side was that we could see the old archways in the wall from inside the garden, which had not been easy when overgrown with luscious blue and purple clematis… sob…

The pond is now part of the garden with a small laurel tree that marks the edge. The stream has also been absorbed into the garden, but the memories still linger and the potential to return the garden to its full glory remains.