Up until the 1930s what is now the utility/ laundry room was the scullery kitchen for the larger of the two properties that made up 8 and 9 West Delph.

The cobbled courtyard (that formed the square garden that the house still retains) backed directly onto the kitchen that has an unusually low entrance doorway. In later years the porch was extended to form the current enclosed corridor that runs along the back of the house.

The scullery is interesting for several reasons. 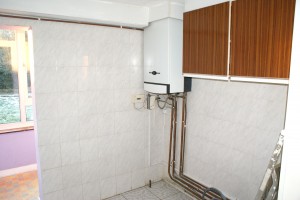 It had two separate  drainage points – on the opposite ends of the wall that originally backed straight onto the garden on the left and far right of the access door. The drain below where the gas boiler now sits was quite wide and was filled with rubble when it was uncovered. It was obviously quite ancient – I did wonder if it marked the spot where a kiln chimney may have been sited, around which the house was built. Ex’s theory, accepting the original use, was that it could have been used as a rainwater butt – the snag is that it would never have filled high enough with water to be much use inside the house. There was a proper well sited near the original entrance to the smaller “half” of the house, which was either absorbed into the drains or patio’d over later. (OS theory – to hide a body – Our collective response – unlikely). The “chimney base” in the Utility room, however, has now been sealed off and tiled over.

The outer wall is quite thick – but it was the back wall of the house, albeit from the days before cavity walling, so that may not be that surprising – the doorway is much smaller than a modern door will fit. The following photo – ignoring the beautiful view of the loo (sorry, delightful and convenient separate toilet) at the end of the corridor, shows the entrance to the laundry, as the first door on the left (the current kitchen is further along on the left – near the end of the corridor).. 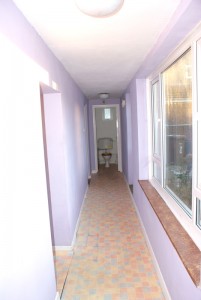 My own theory about the small door (especially with the hole in the corner of the room), is that the room is part of the earliest core of the house – its heart. There will be little evidence left to prove it as the room has undergone so may iterations over the two hundred years, since this current version was built. I do believe that there is historical evidence to show a property on the site before this house. In the days when the kiln was active, there would have been a “kiln sitter” on the premises all the time that the kiln was burning, what better way to check the kiln temperatures than to build a brick hut against one of the chimneys – using the kiln’s warmth in winter to keep warm and then, in summer using the extra dry heat for drying fish caught from the Whitlesey Fens and lamb from the Whitlesey Flock. When the kiln fell into disuse, the part of the property at rightangles to the road was the first to be built – over the kiln entrances – which suggests that remnants of old Kiln Sitter’s cottage were still in use for storage or livestock. Around 1827-1833 when the current form of the house was built, I believe that the extension that is now the main house, fronting onto West Delph, absorbed what was left of the old cottage and now cradles it, making it by far the oldest part of the current structure.

The picture window into the garden is opposite the utility room – very handy, while still doing chores, for keeping an eye (without being obtrusive) on active kids playing outside. In our heyday, Ex grew exotic and fragrant lilies and potplants for me along the stone tiled window ledges.

When we bought the house the previous owner had placed a shower next to the open doorway and “everything” was very visible from the garden. Oddly, Ex wanted to retain this interesting feature – strangely, as I am much less an exhibitionist (however private the garden may be), with two growing lads in the family, I was not as keen. Especially as they had friends round at the drop of a hat.

The problem was resolved by removing the shower and the silly and rather small hand basin and replacing them with a proper kitchen sink and draining board, adding a work table. It was a good decision as it meant easy access to the loo and a useful utility area for walkers, gardners and mechanics (or whatever “other hat” Ex wanted to wear as an excuse to get him, the children and the dog covered with muck). No mud in the kitchen, too! 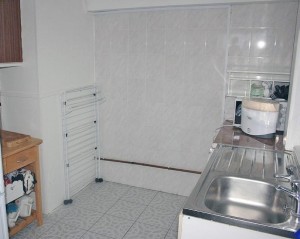 To tell the truth, it does make me a little sad to leave what was such a happy family home, especially when it is so big  but I can console myself with the thought that, at that price, it not only stands a chance of making a great place for an extended family for a long time to come, but will be as good investment for their future, when their children are grown – as it has been for us.